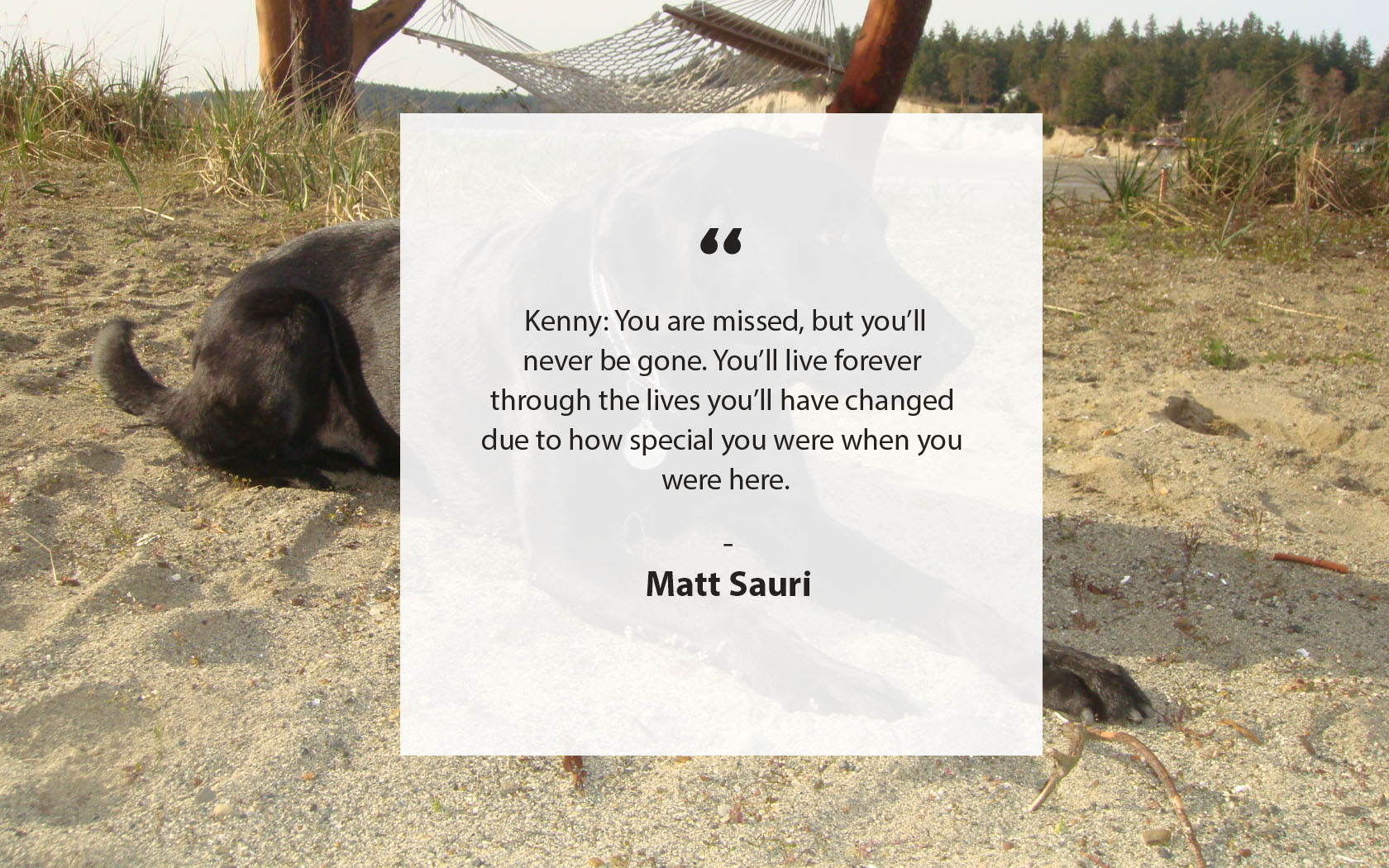 Founder of Project Kenny, Matt Sauri first met ‘the best dog ever’ Kenny when he was around one years old.

Matt responded to an ad in the newspaper (yes, an actual newspaper) for a black lab with championship lineage and was excited because he wanted a dog that loved to retrieve frisbees and lacrosse balls.

Matt rescued Kenny from his breeder after feeling many things: (1) Matt was amazed with the dog’s natural abilities and set aback by how hyper he was.  (2) The dog was also shell-shocked but was so happy to be out of his cage that he’d do anything the breeder asked him to do.  (3) Matt felt sorry the dog and was also convinced that he was going to save him – from the misery that had to come with belonging to Bob the breeder the (racist) hick.

So, Matt brought him home after petting him a bunch and looking him in the eyes. He realized this dog is definitely in a state of sadness, though this would soon change for the better!

For the next thirteen years, Kenny (the canine) would be by Matt’s side and the two were inseparable.  Good times and bad, fun times and sad, Kenny was always there.  He became a mascot at Matt’s place of business, Wimmer Solutions.

He followed Matt everywhere and his only desire was to make Matt happy.  His loyalty was unshakeable and his love absolute.

It was Kenny’s unconditional love that set him apart.  While a lot of people figure that Matt must have it really easy in his chosen profession (Entrepreneur and CEO), it’s actually very challenging.  Between the pressure of feeling responsible for a large employee population, financial pressure, unpopular decisions, difficult conversations, betrayals, necessary silence on certain topics and having to take politically savvy views on others, it’s not all glory.  Matt could always count on Kenny to be consistent with his love and support, though.

Kenny remained strong well into his later years, and when he began to slow down, it happened pretty suddenly.  He started to have a tough time moving around, and while he’d still wag his tail occasionally, he was definitely not very spry.

The Veterinarian had found a volleyball-sized tumor near Kenny’s abdomen.  She mentioned that if it were to burst, it would be the most horrific and painful death imaginable.  Also, there was only a 30% chance he’d make it through the surgery, let alone the recovery.  It was clear what had to happen, and with tears streaming down Matt’s face he had to make one of the toughest decisions of his life.

The vet had arranged for colleagues to come to his home and do what needed to be done.  The appointment was set for the following day and Matt’s daughters and girlfriend got to say goodbye, and there were a lot of tears that night.  Kenny’s ‘last walk’ happened that evening, and he got the sense he knew that it was coming to an end.  He seemed peaceful and relieved, but it didn’t make it any easier for any of the family.

When the vet showed up the following day, it felt like an angel had arrived.  She was professional yet compassionate.  She knew when to talk and when to be silent.  She prepared Kenny as well as her materials before leaving the room and gave Matt and family privacy to say their last goodbyes.  She clipped a generous tuft of his fur for the family to cherish and took his pawprint (which would later be cast into a keepsake).  Then…she went to work, and he went to sleep. The house was silent, cold and while the finality of his absence wouldn’t sink in for a few days, the atmosphere was immediately different.  A very difficult day, indeed.

The appointment to euthanize Kenny had been scheduled in the afternoon, but Matt had previously-scheduled plans to meet up with a very good friend.  Brian is one of the very toughest people he knows – he’s a Green Beret with around 50 months of combat.  He’s also an avid dog lover, and he was a big fan of Kenny’s (like most people).  He grieved with Matt, and it wasn’t long for the waterworks to start again once he told Brian the news.  He wound up offering to spread some of Kenny’s ashes in a HALO (high altitude, low opening) parachute jump during his next training exercise.  He followed through on this, and the picture that was taken by one of his colleagues shows him so high that the curvature of the earth is clearly displayed – and it looks a long way away.  In the picture, Brian’s not wearing his oxygen mask, which he pulled off during the ceremonious scattering of ashes.  He also spread some ashes on the resting place of “Rico’, a relatively famous soldier dog that Brian had served with in Afghanistan, where Rico lost his life in combat.  Brian’s support didn’t end that evening, nor in the ensuing acts, but that’s a different story, and it’s still unfolding.

While most of Kenny’s ashes remain on Matt’s mantle, other distributions were made: (1) on a dock he loved to spring from into Lake Union (it was at the original Wimmer Solutions office); (2) the top of Mt Si, where he loved to hike; (3) on a park bench that was dedicated to one of his canine friends who had also departed recently.  ‘Moka’ was the name of this sight hounded whippet, and his name was inscribed on a placard attached to the bench, which sat in a park where Moka loved to run.  It felt good for Matt to lay him to rest, but it wasn’t enough.  After all, Kenny had no park bench named after him.

Shortly after Kenny’s ‘graduation’ (as Matt would begin to describe it), it was his favorite time of the year- Late October, when the Hawaii Invitational Lacrosse Tournament takes place.  Wimmer Solutions has been sponsoring a team to compete in this amazing tournament since 2004, and it’s been a great way to live up to their company motto: Care Creates Community.

During Matt’s time in Hawaii he found himself really missing Kenny and it caused him to begin research on existing organizations that do something really important: to provide trained canines to veterans suffering from PTS/PTSD.

A few weeks after Matt returned from Hawaii, he sat down for a discussion with yet another person who would add immediate and lasting impact to the mission of providing trained canines to veterans suffering from PTS/PTSD.  His name is Eric, and like Brian, his background was in Special Forces.  Their discussion was to be centered around his career options following his retirement from association with the US Military.  After all, Matt is somewhat of an expert on employment and a large part of his own career has been spent in helping others think about theirs.  However, considering Eric’s background, he thought he’d make a quick mention of the new mission that was born back in Hawaii.  Matt told him he just wanted to plant a seed, and that they’d talk more about this mission another time.  After all, they were there to talk about Eric’s career.  Eric politely but directly told Matt that we would indeed be talking about the mission; we’d discuss his career another time and replied, ‘I can help you, I’ve seen the process and it’s cumbersome.’

Eric also stated, “I can walk you through it.  I can introduce you to people who have been through it so you can get their perspective, so you can hear their stories.  Also, most importantly, I can help you find the *right* people, the soldiers who really need the help.  Because…I’m sorry…but I’m tired of seeing people who have heard a gunshot once and now have their hand out for the rest of their lives, meanwhile there’s a 22 year old kid with his foot blown off who doesn’t know how to ask for help.”

Eric was then fired up, and he was sincere.  He also told Matt, “I’ll do these things gladly, but under one condition:  you’re going to call this mission ‘Project Kenny’ because I think that in some way, this is about him.  And with his name attached, I know you’ll be able to persevere when it gets hard, and it WILL get hard.”  You see, Eric knew Kenny as well, and was a raving fan.

Matt knew better than to argue with the Green Beret, so with that conversation, a new entity was shaped and named.  Project Kenny was now on the rails, barreling towards its inevitable success.  Then, the work began.  And, today, it continues…

Kenny:  you are missed, but you’ll never be gone.  You’ll live forever through the lives you’ll have changed due to how special you were when you were here in the flesh.  Thank you for all you’ve done for me and so many others.  You see, my life isn’t easy, nor simple.  But with your help, I got through it.  The people we’re going to help, though, have had it much tougher than me.  I wish I could give them a version of you, and that’s exactly what we’re going to do. – Matt Sauri